The Confines of Fear – Politics, Media, and the Fear Response

I started writing this post in July. It got put on the back burner, but resurfaced this week for two reasons. One, if you haven’t heard yet, Donald Drumpf was elected president, in a turn of events that many people I care for see as a direct threat to their lives and freedom. Two, the lecture I had already scheduled for my music students at IU this past Thursday, two days after the presidential election, was about performance anxiety – specifically, the role of our nervous system and its fear response. It’s been a week since the election now – an epoch in the rapid-response, 24-hour “news” cycle, the share and re-share culture of social media.

But I wanted to take my time, because I want to be very clear as I’m talking about fear. If you feel afraid right now, I am not commenting on the validity of your fear. You have a right to feel afraid if you feel threatened. I am not commenting on the validity of the threat, and I am not telling you to “calm down.” I’m not here to foster political and social divides, but to help you be more integrated in your Self, which will give you tools for power, non-judgmental processing of information, non-reaction to stimulus, and freedom of thought and movement.

Here’s something I know from experience: you have a choice whether you want to remain in a state of physiological fear response. You have a choice that starts with how you use your musculature, which will have ramifications through your nervous system, and which may allow you a little more space in your thinking. My personal response since last Wednesday morning has been that I need to grow in my ability to love and be present and compassionate to others, and to take action with a clear head. I can’t do that if I’m locked in fear.

When I started this post in July, there were videos of senseless violence, vigils, protests, funerals, pictures of courage and conflict, and if one chose, one could fill one’s hours watching and sharing these on social media, reading and viewing over and over. This presidential campaign was the most negative campaign in memory, with each side afraid that the other’s candidate would strip them of cherished rights and freedoms (I’m not saying either side was wrong, I’m simply saying that they were afraid). For the last week, media sources have reported an uptick in hate-related crimes against people of color, women, immigrants, members of the LGBTQ community. People I care about are afraid for their families and their safety. There are articles pondering whether Drumpf will follow through on the most hateful of his campaign promises. Again, you can read, share, watch, comment to your heart’s content…or discontent, perhaps. The media cycle during this presidential campaign has become a chain of instant reactions to startling news, which people consume on repeat.

What happens when we’re startled by something? Whether it’s an unexpected loud sound, distressing news, tripping over something on the floor, or even an unwelcome idea, we often respond by tensing the muscles at the base of the skull and raising the shoulders up and in. This is a protective response, initiated at a physiological and neurological level by the sympathetic nervous system (SNS). The SNS is famous as the origin of the Fight – Flight – Freeze – Faint Response. In animals, it’s very clear: 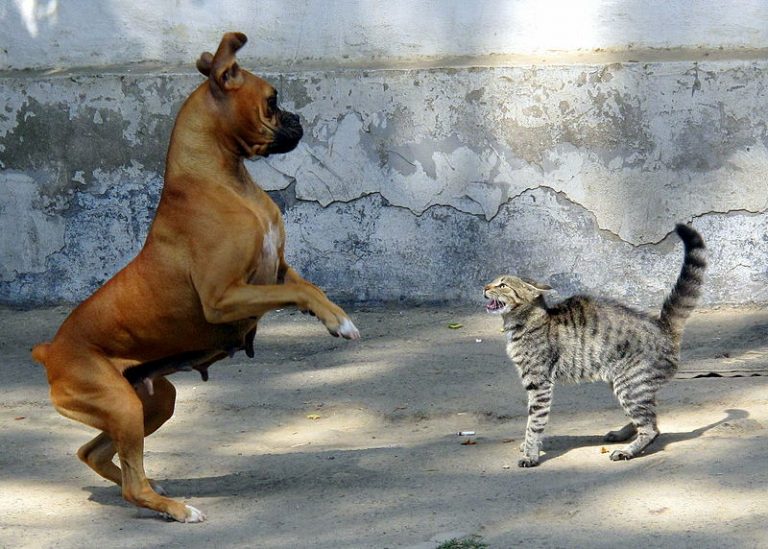 Have you ever watched two dogs that were jockeying for status? An angry cat? The head pulls back, the shoulders and neck tense, all in preparation for attack or defense. It’s also the system that gets a creature ready to run from a bear, from a tree about to fall. It’s the “deer-in-headlights” response of freezing in place, seemingly without the ability to move. It’s the “play dead” response used by animals to protect themselves from predators.

The same response is evident in humans. After a lesson a few months ago, a student and I who are on the same page politically were discussing some developments in the US presidential campaigns, which she viewed as troubling. I watched as my student – who had been using herself marvelously with a free neck and easy back just minutes before – contracted her neck and pulled her head back and down, her chin jutting forward. I drew her attention to this, and with my hands gently guided her head and neck back into a balanced coordination.

This is exactly the same response I noticed in my Facebook feed on Wednesday morning. Some were ready to Fight. Some were ready to move to Canada (Flight). Some were simply stunned (Freeze). Some were in such despair that they couldn’t process (Faint). The SNS response is physiological, and again, I want to say that however you responded to these events, your response is okay. I just don’t want you to be confined by your feelings of fear.

When we are bombarded by startling or distressing news, we are reinforcing this fear response. Say there is a bear. The SNS helps us get ready for a fight, or to run, or to play dead, or stand perfectly still and hope the bear won’t notice. Our SNS response starts in the spinal cord, below the level of cognitive thought. The SNS causes the release of norepinephrin (adrenaline), which raises our heart rate, contracts the bloodvessels in the limbs, contracts the pupils of the eyes, etc., which prepares us for action. Since we know the body and mind are not separate, there are mental components to this SNS response – anxiety, worry, fear. If there is just one bear, and we escape or the bear leaves, we then let the other branch of the autonomic nervous system take over. The parasympathetic nervous system (PSNS) is the “rest and digest” response, lowering heart rate, releasing blood vessels, dilating the eyes, and redirecting blood flow to our digestive organs. But if there is more than one bear, or if we keep focusing on the bear to the exclusion of all other stimuli, we can be physically and mentally confined in a Fear response.

Your body has this response on its own time, regardless of what the threat is. If you perceive it as a threat, you will likely have an SNS response. If that SNS response is not fully released, we can get stuck. F.M. Alexander wrote in his books nearly a century ago about “unduly excited fear reflexes,” meaning that he saw the people of his day (without television, computers, or twitter) as overstimulated, locked into a head-back, shoulders-up defensive posture. What about us? Are you raising your shoulders, tensing your neck, in defense against what you are reading in the news? Are you tightening your abdominal muscles, or the muscles of your legs, in preparation for flight? You may be doing these things below the level of cognitive thought, but that doesn’t mean you don’t have a choice about it.

Try an experiment. Turn away from your screen. See the wall across the room, or look out a window. Notice where you’re sitting. Allow yourself to meet the chair, or get up for a walk and notice how you’re standing. Check in with your neck – is it free? Tell yourself, “My neck is free.” Say it enough times that you start to listen to yourself. Check in with your hip joints – are they free? Tell yourself, “My hips are free,” enough times that it starts to make a difference. Notice if you’re holding extra tension in your shoulders, arms, hands, legs, or feet. Identify it, don’t judge it, and see if it’s necessary. You have a choice. Do you feel different than you did a moment ago?

Now, go back to your news, or your social media feed. Look at the article, and read its title. Tell yourself, “My neck is free.” Notice if you are being drawn to your computer screen. If you are, come back to your hip joints and abdominal muscles. Are they free? As you read, keep part of your attention available to your Self. Are you using a free neck, free hip joints, free shoulders and arms? If not, you can choose to do so.

I don’t want you to be confined by your fear. I want you to be free to wrestle with it, to understand it, to empower your whole Self to move into the next moment as you choose. Each of us has choice. I can choose to read the article or not. You can choose HOW to use your Self while you read the article or not. This is power, folks. You are letting your Self be free of the physiological fear response, which gives you more choice in what you will do, how you will do it, and it also gives you more clarity of mind. Instead of being reactive, you become responsive. You can choose what stimuli you will respond to, and what your response will be. You haven’t eliminated the threat, and you haven’t judged the threat or your own fear (or anyone else’s), but you have made a choice to control what you can control – your response to it.

Wednesday morning, I had to apply all of the skills I’ve learned through my practice of the Alexander Technique in order to move through and process the news in a way that didn’t pull me down into despair. It was hard work. Choosing your reaction to troubling stimuli is not always easy, but in the long run, it allows you to be more effective in the work you do and more present to those around you.

As individuals who are part of both a nation and of local communities, we can choose to live in fear of one another, or we can choose to use our Selves well so that we are not reacting with a Fight/Flight/Freeze/Faint response to each piece of news, however troubling. Our freedom of movement and thinking will allow us to take action in ways that are life-giving. If you are reeling from this election, regardless of who you voted for, I offer you a space that will be compassionate. We’ll work together to quiet the nervous system response that might keep you in fear. Please contact me if you have any questions or comments – I look forward to hearing from you and hope to see you soon.