A 2011 article in The Onion (a “farcical newspaper”) posits that “all American problems—from stuck jacket zippers to the national debt—could be solved if citizens just stopped, took a deep breath, and thought for two seconds before they acted.”

In The Onion, it’s a joke, but it hits close to home. Can you think of the last time you (or someone else) could have used an extra pause before acting?

When we react to stressful situations by rushing forward into them, we take all of our tension with us. We literally have less room to think. Alarm causes a physical response, usually beginning with the ‘startle pattern.’ We’ve all seen it: in response to a loud noise, for example, the neck contracts, pulling the head down, the shoulders jerk up and inward, and if significantly startled, we might find our legs and arms tensed and hands raised defensively. We can be startled by news, by a loud sound, by an onslaught of emails, or by another driver weaving into our lane, but the same response may take place.

The startle response is biological, and a precursor to Fight-Flight-Freeze: the effect of the Sympathetic Nervous System getting us ready for intense action, say, fighting a bear we’ve just stumbled into, or running away from it, or playing “dead” and hoping the bear ignores us. If you’re confronted by a bear, this is a useful response! If you’re confronted by a difficult social situation or antagonism at work, it’s not.

Add that to the amount of stimulus most of us take in every day (email, social media, news, not to mention the regular happenings of our lives) and the rapid-response culture we inhabit, it starts to make sense that many people seem to be locked into a constant state of startle and fear. (Notice how we even call high-stakes situations “pressing”?)

Choices made out of fear don’t tend to have positive results.

The good news: changing your response is as simple as stopping.

The next time you’re confronted with something startling or fear-inducing, STOP. 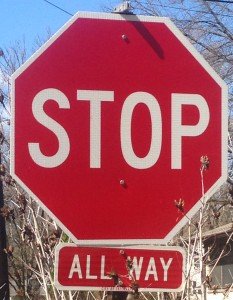 As you continue to pause, notice what’s happening in your head/neck/torso. Is your head pulled down?

If yes, STOP AGAIN. Don’t try to “fix” it by pushing the head up. Instead, become aware of the muscles deep at the back of your head, where the skull connects to the spine. Release them. Take notice of the SPACE around you: above, behind, below, in front, to each side. Allow your whole self to release into that space, from head to feet.

Once you’ve released out of the startle pattern, you can choose how to respond to whatever stimulus is in front of you.

Getting out of the cycle of rapid-response, fight/flight/freeze decision making is really as simple as stopping to think. Next time you’re faced with a potentially “pressing” choice, try pausing, noticing, and thinking your way to release of tension. I would love to hear what you notice!